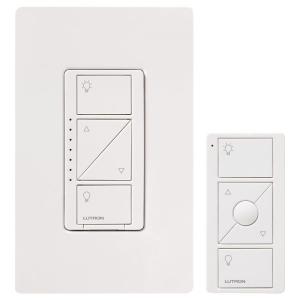 So I finally did it!

I replaced my last X10 power line device (I still have some X10 RF motion sensors and keypads for the time being).   Probably a good thing too since when I pulled the switch out it had broken in half...

I got the Lutron Casetta dimmer kit from Home Depot. This included a wire in dimmer switch, a mini remote and the wired hub plus all the required hardware.

The wire in dimmer works with LED, incandescent and halogen loads and does not use a neutral wire.  It has 4 buttons on it: On, Brighter, Dimmer and Off and it also has a row of LEDs to indicate the current brightness.   It comes with a screwless (clip on) face plate with a plastic surround which I assume would go in a single gang box as assembled, I needed to put mine in a double gang box so I had to unclip the face plate and unscrew the plastic bezel and it fits perfectly in a standard Decora style cover plate.     It comes with 3 wire nuts (source, load and ground) and mounting screws to attach it to your electrical box.   It's considerably deeper than a regular switch, but smaller than a GFCI or the X10 module I had in there.

Installation is a breeze.  Turn off the breaker, remove the old switch, connect the line and load wires from the old switch to the wires coming out of the Lutron switch with the included wire nuts (You can connect the ground wire if you want but it's just crimped to the part that connects to the box so as long as your box is grounded it should be OK), then use the included screws to attach it to the box and finally clip the face plate on and turn the power back on. So easy even a caveman could do it!

The pico remote is the same size as the paddle of a Decora switch, it's relatively thin and runs on an included coin cell battery (probably a CR2032). It has all the same buttons as the main switch with the addition of a round button between the dimmer buttons which sets the brightness to 50% and a single LED.

It comes attached to a clear wall mounting clip with mounting tape on it. This allows it to be used as a "stick a switch" but can also be easily removed by sliding it out of the holder for portable use and to change batteries.

The last included piece is the wired hub.  It is a little white box and it has a strip along it that lights up white.  It comes with a power adapter, and a network cable.  (It does not support Wi-Fi).  Once you power the hub up and plug it into your network you can download the Lutron app for your phone or tablet and it will locate it and instruct you to press the button on the back of the hub to authorize your phone.

Once the basic setup is complete you will be prompted to pair your devices...  This involves going to the device (remote, wall switch, whatever) and holding the off button for 10 seconds until the lights flash quickly.  They will then be added to your app/hub after you give it a name.

You can assign the remote to scenes or individual devices via the app as well you can touch the light for an on screen remote with an on, off and a dimmer slider for any light on your system.  As well you can program timers with fairly granular control within the app. (Your remote and app can also be paired to work with Sonos systems, some Honeywell smart thermostats and other smart devices)

I've had no range issues and they give you ways of adding plug in modules to repeat the signal if you do run into trouble.

As far as hacking and integration goes, it seems there is a pro version which lets you enable telnet to send and receive commands but this kit seems to only include the standard version.

Fortunately the internets have come to the rescue and given us a certificate for logging into the SSH interface (there is no shell sadly, it's just a raw API type interface over SSH).

I have installed the library "pylutron_caseta" and got it working to the point where it can send and receive commands from the hub.  I get updates every time the switch changes state and can send a level from 0 to 100 (0 being off, 100 being on and 1-99 being a dim level) to control it.

I publish the state of this light to MQTT so my existing infrastructure can read it's current status as well as accept commands via MQTT to set the brightness level.  I also handle my MQTT switch I made earlier within this app the minimize delays and the switch works almost instantly now vs the 1-3 second delay with the old X10 system.

I'm not going to bother posting the code at this point since it's mostly just calling the module with a little bit of magic sauce for the MQTT stuff to work.  If you ended up here looking for a code example just leave me a comment and I will post my code.

Since it works in conjunction with my automation system as well as a motion detector the switch acts similar to a 3-way switch so flipping the switch will toggle the lights to the opposite state rather than having a static on/off position like a normal switch (though I do transmit the physical location of the switch to MQTT so I could easily change that).  When the lights are in a dimmed state, the first flip of the switch will bring the lights to full brightness and then toggle from there on out until they are dimmed again.

And now for the video of the new system working: