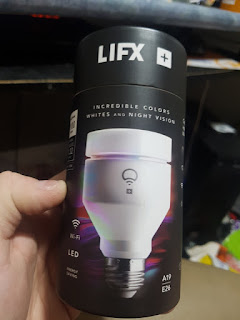 I got a Lifx+ bulb on a Black Friday deal.  I was able to get the LifxLAN python module to work pretty easily with one caveat.

It doesn't support giving it the IP of the bulb, you must detect it via UPNP and this will work 99% of the time, HOWEVER if you have multiple subnets/IPs on your NIC or multiple NICs it will pick one to use for broadcasting and you can't tell it which one.   This caused some hair pulling but I eventually realized it was broadcasting to the wrong network, made a quick update to the module and I was up and running within about 5 minutes after that!

Other than that the module is pretty well documented and easy to use.  You will need to do some math to convert between RGB and HSV that is used by the bulb if you want to use a HTML color picker or anything else that uses RGB or hex color codes..

You can fully control the IR channel independent of the bulb's color and brightness.  The IR is completely invisible to the eye (unlike night vision security cameras which often glow a dull red) but it also doesn't generate a ton of extra light on my cameras (I tried my phone in a dark room and I tried with the bulb on my front door with my front camera). It helps a little bit if your camera is struggling to see at night, but it's really not worth the extra $20 it costs for the plus model.

It is pretty bright in white mode, I keep the brightness down to 70% by default so my front steps aren't glowing, however once you start turning on colors it gets considerably less bright and I find I need to push it to 100% for it to provide enough light to see by particularly with darker colors like red/orange and even then I find it doesn't provide adequate illumination.

It's able to produce many more colors than my miLight RGB bulb and it's able to push out more lumens in both color and white mode as well as being able to communicate it's brightness and status back to the client, I still don't think you get 4 times the value since you are paying 4 times the price.

I've also had issues with it not being reachable for a few seconds here and there but then it will show up a moment or two later.  I have an access point a few feet away from it so it's not a range issue.

I really can't recommend this product over it's cheap Chinese counterpart.  If it was half the price I would say go for it and that it was a great buy, but I don't feel it's worth the extra expense and I will not be buying more of these bulbs in the future.